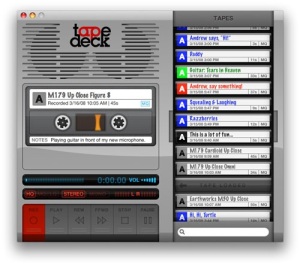 TapeDeck is an new audio recording application written exclusively for Mac OS X 10.5 Leopard that is designed with a quick-capture workflow. New recordings called “tapes” can be started with a single mouse click (or keystroke); the software records directly to compressed MP4-AAC audio, making it useful for a variety of applications including simple high-fidelity recordings of a band, practicing speeches, and capturing hours of lecture. The application was designed to emulate a real cassette tape recorder with a few key differences, the company explained.
“Every recording is automatically saved and organized in the searchable ‘tape box’. There’s no need to ‘tape over’ anything, because a new recording is always just a click away,” the company noted. “TapeDeck also adds many welcome improvements to traditional tape recorders, such as a never-ending supply of tapes to record on, far better audio quality, lots of space to write notes, and full compatibility with iTunes and the iPod.”

TapeDeck records directly to standard MP4-AAC files at one of three configurable compression settings. Users can add titles and even “liner notes” to each tape and allows full-text searches on this data (and makes it available to Spotlight, Quick Look, and iTunes). Users can also browse tapes via the Finder and Cover Flow.

TapeDeck costs $25, and is available now. The unregistered version has approximately 2 weeks of “gradually declining battery life” and only permits short, low-quality recordings are. TapeDeck requires Mac OS X 10.5.2, and runs on any Mac that runs Leopard.

Muxtape works on iPhone! Jam on it!

If you are a Web 2.0 fanatic (which, come on, who isn’t these days?) then you probably know about Muxtape. For those of you who aren’t religiously reading the latest Web application news at DownloadSquad, Muxtape is basically a way to share your personalized mp3 mixtape. Not only can you subscribe to the tape’s RSS via iTunes, but it turns out that you can also listen to Muxtapes on your iPhone!

Just navigate over to the Muxtape page of your choosing and select a song. Mobile Safari will then load the file and begin to play it like normal mp3 audio. How cool is that?

12 different fonts picked for their individuality and design strength. They will run in sync for only 5 minutes in a year, otherwise the display is mixed. You’re sure to keep an eye on this one.

Go Get it HERE!

Those of you who recently bought a new iMac are probably in love with it. However, I think you’ll agree that unplugging and plugging in USB devices left and right can become a pain. Enter the LowKey Stand, a stand that matches the iMac in both looks and usability.

On the front, you’ll find room to store that brushed aluminum keyboard as well as a 4-port USB hub. Having those extra USB ports in the front will prove a lifesaver. The only downfall with the LowKey Stand is that it can support 35 pounds max, so don’t go throwing your CRT monitor on there. $60 and it’s yours.

In another class action suit settlement, Apple has reportedly agreed to give refunds of $25-$79 to as many as 2.3 million PowerBook and iBook owners who purchased faulty power adapters that were prone to spark.
Customers who bought certain replacement adapters for PowerBook and iBook computers are eligible for the settlement, according to documents filed in federal court in San Jose. U.S. District Court Judge James Ware granted preliminary approval of the agreement March 24.

The settlement has not yet been finalized with an approval hearing scheduled for September 8th. 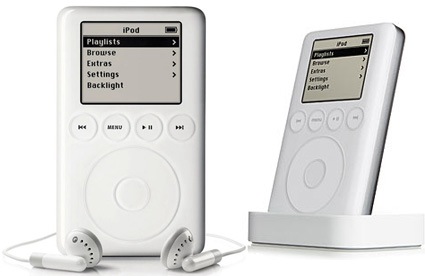 It’s being reported that Apple is offering a $44 dollar credit to Canadian iPod owners, which will total $3.54 billion dollars. The offer is being presented to settle a lawsuit over the battery life of iPods.

Owners of first, second, or third generation iPods who purchased their units before June 24, 2004 are eligible for the credit. Two lawsuits, one filed in Montreal, and another filed in Toronto, each claim that they rechargeable batteries in the devices died after only 3 hours of use, even though Apple advertised as much as 8 hours of use between charges.

As many as 80,000 Canadians could be eligible for a credit. If you think you might be one of them, you can find more information right here

A new limited-edition, Europe-only R2-D2 DVD Projector now has an integrated iPod dock for projecting the Star Wars saga onto your living room wall. Earlier versions of the Artoo didn’t have an iPod dock. The projector is limited to 4,000 units, and costs € 2799 — about $4,300.The dock is compatible with the 1G and 2G iPod nano,* and 5G iPod with video.*(Facts corrected, thanks to reader Mario Panighetti) Link

Used iPhones Worth $1,000 in Ukraine — Even Scratched Ones

Used iPhones are worth more than $1,000 in Ukraine, according to the Craigslist buyer who just purchased my slightly scratched iPhone for (get this) $350.

The buyer, named Claude, is heading to Ukraine next week on business and everyone he meets will ask him for an iPhone, he says. He’s sold dozens of iPhones, new and used: It doesn’t really matter.

In fact, I sold him two iPhones: a virgin 16-Gbyte model still sealed in its box, and my slightly worn day-to-day iPhone, an original 8-Gbyte model.

I felt pretty good until Claude told me he’ll be getting at least $1,000 for the used iPhone in Ukraine, and more for the new one. WTF! — thanks for telling me!

Still, it’s not all gravy. Claude says he has to keep the iPhones on his person when passing through customs, or they disappear from his luggage. Likewise the chargers, cords and everything else. Plus, he has to bribe every official he meets.

Claude wasn’t aware there’s a new iPhone model expected next month (which is why I’m selling). Not that it mattered. He says he’ll take all and any iPhones I can send his way.

Anyone want to get rid of their old iPhone?

BAD APPLE!!!
Apple has been ranked the worst among all major PC vendors and other large electronic firms in the fight against climate change.
Climate Counts this week released its second annual Company Scorecard hoping to create a “simple, easy-to-understand ranking of companies would motivate both companies and consumers to step-up their efforts on climate change.” Apple was ranked in last place among the list of 12 electronics companies, while companies such as IBM, Canon, Toshiba, Sony, and Hewlett-Packard were near the top of the electronics industry.
Top honor went to Nike, which passed last year’s high scorer, Canon, to become the top scored company among the 56 companies evaluated. Apple was the only electronic company to receive a “Stuck” designation, with a recommendation as a choice to “avoid for the climate-conscious consumer,” because the company has taken “meaningful action against climate change.”