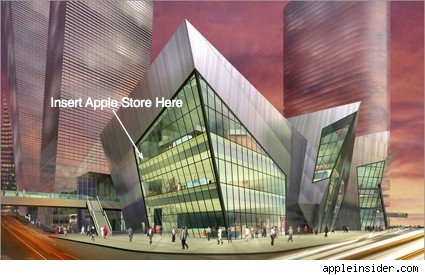 CityCenter is a massive new multi-use building project designed by architectural rock star Daniel Libeskind. It is currently under construction in Las Vegas, and — according to AppleInsider — the jewel in this glittering crown will be a supermassive Apple Store, located directly in the front of the complex right along Las Vegas Boulevard.

Quoting “people familiar with the project”, AppleInsider claims that the store will boast over 20,000 feet of floor space on two levels. The article is accompanied by architectural renderings, though none of them feature any giant white apples or other clues as to the exact placement of the store.

The CityCenter project has been controversial in Las Vegas; six workers have died on the project since it began, and construction workers walked off the project last Monday after union safety negotiations with the general contractor failed, though they returned the next night. The project is due to be completed in the fall of 2009, at which point the new Apple megastore will join the two existing Apple Store locations on the Strip. (AppleInsider incorrectly states that there are three locations, but the third Apple Store in Nevada is actually in Reno, on the other side of the state.)

Speaking as a resident of Sin City, I’m not sure if CityCenter is going to be a beautiful hypermodern arcology to rival Tokyo’s Roppongi Hills, or just another big ugly thing for drunken idiot turistas from the Midwest to throw up on. But if they’re really putting a ginormous Apple Store front and center, I’ll be out front on opening day with the rest of the rubes.