Quicktime 7.5 out and ready to be downloaded!

QuickTime 7.5 was released earlier today via Software Update. According to Apple, this update “…improves application compatibility and addresses security issues.”

Often, Quicktime updates coincide with iTunes updates. Since we know that the 3G iPhone will require iTunes 7.7, we suspect that’s what the “application compatibility” refers to. Apple recommends this release for all QuickTime 7 users. Note that a restart is required.

Want an iPhone 3G? First, Check out these 4 iPhone killers

Thinking about an iPhone 3G? Not so fast — check out these 4 iPhone killers first 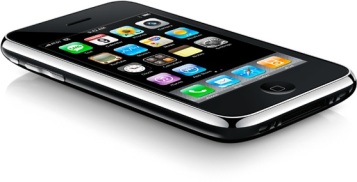 When you’re as popular as the iPhone, you’re bound to have some enemies. The competition is catching up, but the impression the iPhone has made on them is undeniable. Full-bodied touchscreen phones that do more than just enable calls and grainy pictures are now a hot item thanks to Apple — though maybe you’re still on the fence as to whether or not the iPhone 3G is right for you. Maybe you’re in the middle of your current plan and don’t want to switch, or maybe AT&T’s coverage isn’t all that great in your area. Either way, you’ve got options.

Click Continue to see what phones are looking to settle the score.

1. HTC Touch Diamond
HTC finishes cutting its 3G diamonds in July for a variety of carriers. The Diamond does a lot to distinguish itself with its looks and interface, and yet its clickwheel won’t help you forget how iPhone-influenced it is.

Not like the iPhone:
• Glossy frame with angles to resemble cut diamond
• Horizontal menu system (rather than a panel of favorites)

Samsung comes out swinging in 3G for Sprint on June 20th. The Instinct does a lot of things right, but, at the same time, almost everything it gets right the iPhone did first. Including the case design.

Weaknesses:
• Relies on Sprint’s proprietary services for music and video, among other things

LG’s 3G “TV phone” is already available, also on AT&T, and shares a lot with the iPhone. One big problem with that: it competes directly with the iPhone for AT&T’s customers.

Not like the iPhone:
• Navigation screens categorized into segments

Weaknesses:
• Competing with the iPhone on its own network

And there’s one more shadowy contender off on the horizon, where a storm’s certainly brewing — the recently announced Blackberry Thunder. When the first iteration of the iPhone was released last year, it took a lot of heat for not offering a full corporate suite of software that has Crackberry users loyal to the brand. And now RIM is planning on a full, touchscreen Blackberry with the Thunder: 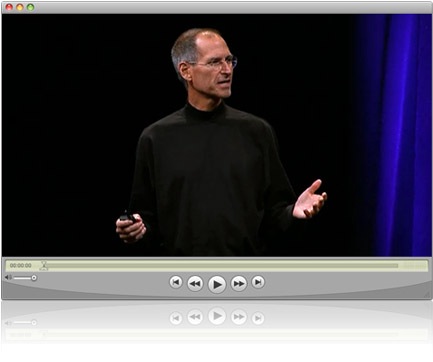 MobileMe gets a video tour, and John the Apple guy is your guide 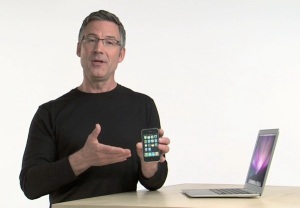 By now you’ve probably heard about .Mac’s replacement, MobileMe. It’s like Yahoo! Mail, Google Docs, and every other Ajaxy web app you’ve ever used… just way more Apple-ish. If you’re feeling confused by all the synchronized over-the-air options it presents, your good friend John (aka Classy Apple Dude) is here to explain things in a simple, easy-to-understand tour. Just watching this makes us feel safe, secure… and frankly, a little sleepy. Watch it HERE 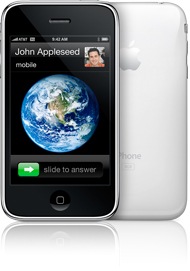 Gizmodo just talked to AT&T’s President of National Distribution Glenn Lurie, who gave us all the new pricing and activation details for the iPhone 3G, which won’t be getting special treatment anymore. It will be using all AT&T’s standard voice and data plans, which means $30 for unlimited 3G data for consumers, $45 for business users on top of voice. Also, no in-home activation for iPhone 3G—it will have to be activated in store (at AT&T or Apple Store), which takes 10-12 minutes, meaning that first day line is going to SUCK. And you will have to camp out, since there won’t be any online ordering at launch—and Glenn was mum on how many phones there’d be to go around.

Supposedly the network will be ready, even if the supply won’t be. I asked him four different ways if it was ready for the onslaught of millions of 3G data phones and he said “absolutely” each time, and that they’ve planned for it. What’s unclear is how many units they’ve planned for the first day. He said they expected “high” demand but nobody knows what the “full demand” will be, in response to my question about meeting demand. More details on everything will be coming from AT&T in the next week or so.

Tap into the App Store and you’ll find applications in every category, from games to business, education to entertainment, finance to health and fitness, productivity to social networking.  These applications have been designed to take advantage of iPhone features such as Multi-Touch, the accelerometer, wireless, and GPS. And some are even free. You download them wirelessly and can start using them right away.

Get applications anywhere.
The App Store on iPhone works over cellular networks and Wi-Fi, which means it’s accessible from just about anywhere. Browse categories, do a keyword search, or take a look at recommendations. Then download and install applications directly onto your iPhone.

5 things Apple forgot to put into the 3G iPhone

5 things Apple forgot to put into the 3G iPhone 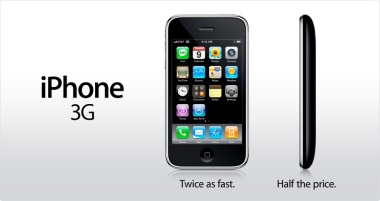 The new iPhone has some sweet new features. As an iPod owner, I can say that a 3G network connection, GPS, and a headphone jack that isn’t completely ridiculous are great additions to an already impressive gadget, and will go a long way to swaying me toward getting one. But let’s be honest — we all had a wish list of stuff we wanted to see in the iPhone the Sequel, and it’s doubtful everyone was satisfied. Hit the Continue jump for a list of the Top 5 features Apple left out of its newest toy (and don’t forget to check out the 5 things we like most about it).

1. Cut and Paste
Every iPhone owner has at some point wanted to snip part of an e-mail or text message and paste it into a browser or note. If it weren’t for the iPhone’s already impressive ability to recognize URLs, phone numbers and e-mail addresses, this would be crippling. More apps, however, means more ways to miss this crucial feature of all modern operating systems.

2. Haptic Feedback
Having the screen vibrate slightly when you touch it would do wonders for being able to operate the iPhone while it’s in your pocket. I mean does Steve Jobs pull his iPhone out every time he wants to switch tracks while riding the subway? Oh, wait a minute…

3. Flash Compatibility
This is the albatross that’s holding back the mobile Safari browser from acting like a real browser. When you can’t see websites like, well, SCIFI.COM, you start to feel like you’re surfing the Net in 1998.

4. A Better Camera
It’s always stunned me that the iPhone, one of the best portable video players I’ve ever seen, has a camera that can’t capture video. A flash wouldn’t hurt either, and certainly wouldn’t drain the battery more than that 3G connection.

5. Wireless Modem Capabilities
The problem with wireless modems — special cards that you plug into your laptop for access to the Net via a cellphone network — is simple: They cost too damn much. That’s why it’s great that some phones can share their Internet access with laptops letting you piggyback on their networks (that you’re already paying to access) via a wireless Bluetooth connection between the phone and laptop. With the new iPhone’s 3G tech, it seems like a natural to double as a wireless modem, but Apple’s kept the iPhone’s Bluetooth technology firmly grounded in 2005, only allowing an audio connection with wireless headsets.

Want a iPhone 3G? You get a NEW two-year contract with At&t

Current iPhone customers can upgrade to the 3G iPhone and pay $199 for the 8GB or $299 for the 16GB model. They will need a new two-year contract.

Customers who purchased a 2.5G iPhone on or after May 27 and want to swap it out for a new iPhone will be able to do so without incurring an additional handset charge for the new device. (There will be a 10 percent re-stocking fee.) They will of course need to turn in their 2.5G iPhone.

10 Things About the 3G iPhone that rock!

10 Best Things About the New iPhone and iPhone 2.0 OS

1. Headphone jack. The new iPhone will have a flush headphone jack. This means you can plug in any standard headphone or speaker device without a $10 adapter. You know, the adapter you discover you left at home just after you get to the airport.

2. 3G. Well, this is a given. You should get twice the download speed on Web pages, videos and email.

3. GPS. Now you will really know where you are. But I can’t wait for the 3rd party apps that will be built around this. I’m sure it will rival expensive GPS devices in functionality before long. Geocaching may go mainstream.

5. Lots of countries: Friends in Canada and Australia will finally be able to get one, as well as lots of other countries.

7. Lots of free iPhone apps. I predict that a majority of iPhone apps will be free, cool gizmos created by hobbyists. Something new to discover every week, most likely.

8. Bulk delete for email. Sounds silly, but this eats up a lot of my time.

9. MLB.com live game updates. This is one of the primary things I use my iPhone for right now, via Safari. A dedicated app would be great, as long as there isn’t a subscription fee attached. 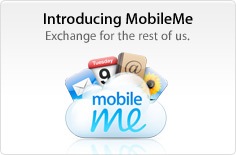 MobileMe is Apple’s new Internet service for Mac, iPhone, iPod touch, and PC that takes the best of .Mac and adds many new features. With MobileMe you will continue to get services that take advantage of Mac integration such as iDisk and photo sharing from iPhoto ’08. You also get a suite of new web applications at me.com; push email, push contacts, and push calendar; and 20GB of online storage.

When will I be upgraded to MobileMe?
The transition will occur in early July when MobileMe becomes available. A change of service email will be sent to your mac.com address when the upgrade occurs.

Will MobileMe work with my Mac the way .Mac does?
Yes. With MobileMe, you’ll continue to enjoy features that take advantage of seamless integration with Mac OS X and iLife, such as:

Back to My Mac
Access to your iDisk in the Finder
iWeb site publishing
Mac-to-Mac syncing of contacts, calendars, bookmarks, and more
Photo and movie sharing directly from iPhoto ’08 and iMovie ’08″

Lots of good info. – Get it all HERE