We have received some new information regarding Apple’s Macbook and Macbook Pro models, which have been long overdue for a design overhaul. Although the current case design is nearly flawless on both, rumors have continued to circulate about complete case refreshes for both machines.

We have spoken with a connected source close to us, and they tell us that the Macbook Pro will,

“100% have a Macbook Air-like keyboard. Feeling more like the Macbook’s current keyboard, yet offering backlight.” We asked about the track-pad but they shrugged it off as if it was no big deal. Almost indicating that the current track-pad might be sufficient in Apple’s opinion. We also asked if they could confirm a launch date, to no avail. We think it would only make sense for the Macbook Pro to inherit the Air’s track-pad. And based on Apple’s past history, the end-of-the-summer (right before school starts) launch date seems pretty accurate.

“With all Apple notebook systems due to ship with multi-touch enabled trackpads following this summer’s MacBook and MacBook Pro design overhauls, Apple is putting the finishing touches on a complete multi-touch framework that will ship as part of Snow Leopard.”

“Apple Inc.’s existing MacBook and MacBook Pro notebooks will be the last of their breed, as both product families are destined for major design changes upon their next refresh.” Additionally, Apple Insider continues to explain that the Macbook Pro will “borrow several design cues from the aluminum iMacs and Macbook Air.”

Hopefully Apple is finally getting rid of the hatch closure on the Macbook Pro to fit it with the same magnetic closures that Macbook sports.

An infusion of some of the Macbook Air’s amazing features and design elements into the Macbook or Macbook Pro (hopefully both) will be very welcomed by the industry. We’re very confident in this rumor being true, yet there’s definitely a chance it remains what it is… a rumor.

500GB finally arrives for your MacBook/MBP

Samsung’s long-awaited 500GB hard drive that fits in all MacBooks and MacBook Pros (as opposed to Hitachi’s, which, at 12.5mm tall, only fits in the 17” MBP) is finally available to order—and it’s cheaper than expected!

I, for one, have been waiting for a 500GB laptop drive since it was first announced way back in January. So when it hit the OWC catalog at MacSales.com, I jumped right on and bought it. The bad news is that OWC only sells it as part of an “upgrade kit,” which includes an external, bus-powered USB enclosure to use as a new home for the drive you’re replacing. The good news is the price: $287 (plus shipping). That’s a good price for a drive with an enclosure, especially since the initial pricing for the drive alone was supposed to be about $300.

I’ve now happily had the drive installed in my 15” MacBook Pro for a few days now with no problems at all. The enclosure that came with it is nice looking and well-made, though it could stand to be a tad smaller. It was also pretty handy for cloning my drive to the new one prior to installation. Samsung also includes software for this, but I chose to use SuperDuper!, so I don’t know how well the included software works. The enclosure is USB 2.0 only, so my 201GB of data took just over five hours to clone (speeds hovered around 13 Mb/s—your mileage may vary). When I installed the new drive, absolutely everything looked and worked exactly as it had on the old drive, with the exception of how much space I had left! Of course, if you’re not comfortable taking apart your Mac, make sure to pay a professional, Mac-certified technician to do it for you; just do your own data transfer first and save yourself some money. Unfortunately, Apple Store Geniuses will not install third party hardware, so you’ll need to go independent.

So what are you going to do with your extra hard drive space?”

Firefoxy Lady By Nitrozac and Snaggy 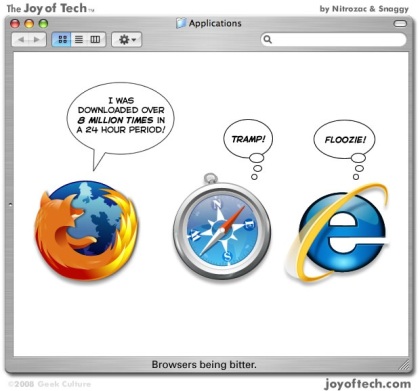 (Via All Things Digital)

Store everything on-line with SmugVault!

SmugMug has always allowed everyone to upload an unlimited number of web-displayable files – JPEG, GIF, PNG, and MP4 – but to date we haven’t been able to accept the RAW files generated by modern digital cameras. For years our customers have been asking, begging, and pleading for us to let them upload their priceless archives. I’m happy to announce that day has come!

SmugVault is a new SmugMug product that lets you upload all the RAW, PSD, BMP, and TIFF files you’d like. And not just those – we’ll accept XMP sidecars, PDF files, Word documents, Excel spreadsheets, video archives, and anything else you might want to store with your photos. What’s more, we’ll bundle your files together for easy, intuitive browsing and safe retrieval.

Thanks to an innovative new product from Amazon Web Services, DevPay, you only pay pennies per GB for the storage you actually use each month. There’s no huge fee with a maximum storage amount – it’s truly unlimited and pay-by-the-drink. Store one megabyte or one billion megabytes – we don’t care. Whatever works best for your workflow and archival needs, SmugVault can handle it.

Check it out HERE

Fandango offers ticket purchases from 15,000 theaters across the U.S., while Movies.com focuses more on content: reviews, DVD release information, etc. Fandango has already expanded its ticket sale service to Movies.com as of today.

Disney says no layoffs will result from the sale. The exact terms of the deal, however, are not being released.

We all got em, we all loose them! 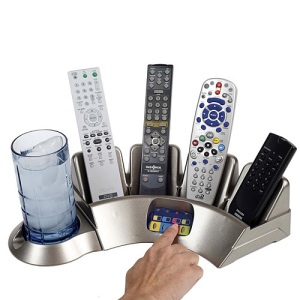 Remote Buddy Stylish vertical remote holder has four seats to store your most used remotes in one convenient location. Also has a handy cup holder for one drink. Color coded, one touch buttons work in conjunction with specific remotes to help you locate lost remotes.

ABC is looking to expand the content it makes available on the Web with a deal to make such popular shows as Lost, Desperate Housewives, and content from ESPN available online at independent site Veoh Networks.

This is not the first Web syndication deal for ABC and its parent company Disney. However, media critics note, it’s significant considering ABC-Disney’s lock-tight grip it places on its content.

However, despite the fact ABC is slowly cracking the syndication vault open a bit wider for online distribution ABC still plans to keep an iron grip on its content. In order for ABC to keep complete control over its video programming ABC is only allowing Veoh.com to show its programming through a proprietary ABC online video player. The way it works is Veoh will not host ABC video content, rather when you choose to view ABC content the site advertises Veoh will launch the ABC video player and playback the desired video.

Veoh users will be only slightly inconvenienced by this arrangement. To view ABC content you will have to download the ABC browser. When I did this, it was no big deal and consider only a mild annoyance.

This means that Veoh is merely a conduit to drive users to ABC’s own website. This relationship is identical to an arrangement ABC struck with AOL last year.

Unlike Veoh’s main competitors, such as Hulu and AOL video, Veoh is a mix of both professional video such as programming from CBS, USA and MTV and user-generated content. This is the second deal for Veoh after it signed an agreement with Warner Bros. earlier this month.

Veoh receives some of its financial backing from former Disney CEO Michael Eisner who was forced out of Disney after a shareholder revolt in 2005. Eisner ran Disney for over 20 years and was responsible for its tremendous resurgence during the 1980s and 90s.

Welcome to another Mac 101 here at TUAW. Mac 101 is our recurring feature in which we point out some tips and tricks for folks new to the Mac. Remember, if you’re a Mac expert this post isn’t for you.

Have you ever tried to unmount a disc in Mac OS X, but it simply wouldn’t come out of your Mac’s drive? Here are three ways to removing discs from your Mac’s drive. If your Mac is currently using the disc you won’t be able to eject it, so make sure that isn’t the case first. If the disc isn’t in use and you still can’t eject it, give these a try.

Step 1: Drag the disc to the trash can
Find the disc on the desktop and drag its icon to the Mac OS X trash can. As you start dragging it towards the trash, the icon will change to an eject button, release the mouse button when the disc’s icon is directly over the eject button.

Step 2: Try some command line good-ness
If you have tried to eject the disc by dragging its icon over the trash bin, then why not try a simple Terminal command to eject the disc. Open Terminal.app (found in /Applications/Utilities/Terminal.app; or use Command + Shift + U to in any Finder window to move to the Utilities folder).

Once you have Terminal opened, type (or copy/paste) the following command: drutil eject

Please note that if you have a disc that is actually stuck in the drive this will not help. Stuck discs may need the assistance of an Apple Genius or certified Apple repair professional.

Green Apple? (is it enough?) 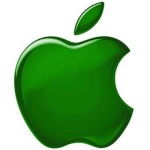 Apple is seen as the greenest IT brand, sharing the lead with HP, Microsoft, IBM, Intel and Sony, reveals an environmentally-focused research study among enterprise technology users.

The survey – conducted by GreenFactor – revealed that 70 per cent of those surveyed said they would be prepared to purchase green products, but only if they were convinced of the positive impact of the decision.

The research was conducted among 3,500 enterprise IT decision makers during the first quarter of 2008 by Strategic Oxygen, GCI Group and Cohn & Wolfe.

Price, company policy, and lack of availability of green products were cited as typical reasons not to invest in greener kit, while enterprise buyers confessed to be searching for green versions of the following products (in order of preference): Laptops; desktops, servers, storage, network hardware.

In nine of 11 countries polled, price was the top barrier. Marketers must focus on better communicating total cost of ownership and overall value to potential buyers.