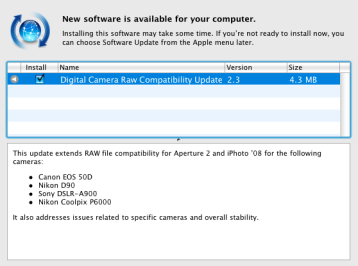 This update extends RAW file compatibility for Aperture 2 and iPhoto ’08 for the following cameras:

Apple Updated Aperture 2.1.1 Today. Apple states it “supports general compatibility issues, improves overall stability, and addresses a number of other minor issues.” As always, it’s a free update (so go get it) via Software Update or download it from the Apple Support site HERE.

Ubermind, a company that has been developing Aperture plug-ins for Apple’s professional photography market for the past two years, has released a few new plug-ins for iPhoto.

Ubermind said they are brining the same technology they use for their high-end plug-ins to Apple’s consumer application. The iPhoto plug-ins are all currently in beta, but are available for download.

Currently the company is offering four plug-ins for users to test. Plug-ins include GalleryExport for iPhoto: exports to and helps manage Gallery installations; UberUpload for iPhoto: adds FTP and SFTP exports to iPhoto; iPhoto to Picasa Web Albums: uploads files to Google’s Picasa Web Albums; and iPhoto to Archive: bundles photos into popular archive formats including .zip and disk image.

The plug-ins are available from the Ubermind beta Web site. 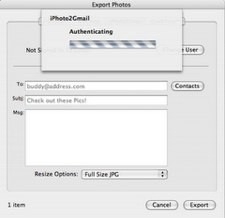 If you love Aperture (or iPhoto) like we do, then you know that there are some nice plug-ins that allow you to export pictures to differing photo sites (i.e. Flickr, etc.). However, if you use Gmail‘s web based e-mail service, then you are out of luck … until now!

Aperture2Gmail (or iPhoto2Gmail) allows you to export your photos in a new e-mail directly to Gmail. You can also resize on-the-fly, just like you can in Mail.app.

So, no more exporting from Aperture or iPhoto and uploading to Gmail one by one. Aperture2Gmail and iPhoto2Gmail is available from the developer’s website as donationware.

(Via MacNN | The Macintosh News Network.)

Breaking News – Apple just updated their operating system Leopard to 10.5.2. It’s a big download with some nice new features. So, go get that download! Hey, it’s free (if you have Leopard that is).Hey Photogs! Aperture 2 has just been released today for the low, low price of $199 (previously$299). Upgrades from the previous version are just $99. The updated Aperture page has all the details.

News – Yahoo says “no thank you” to Microsoft’s bid. In a statement regarding the potential merger, Microsoft said it’s “unfortunate” that Yahoo “has not embraced” its proposal to combine the two companies. Microsoft also hinted that it may take the offer directly to Yahoo’s shareholders, a move that could result in a hostile takeover. (Cue the scary music – dunt, dunt, duaaahhhh).

Yahoo is reportedly in talks with both AOL and Google to try to avoid being acquired by Microsoft.Speaking of Microsoft, since they didn’t get Yahoo it looks like they had some extra $ laying around and decided to get “more” into the mobile phone biz, so they acquired Danger Inc., maker of the technology behind T-Mobile’s Sidekick. Hmmm..can’t you just see it: Ring ring..hey, buddy, your ZUNE phone is ringing?!?!

Starbucks Corp. is teaming up with AT&T Inc. and will start offering a mix of free and paid wireless Internet service in many of its U.S. coffee shops beginning this spring. Java and Wi-Fi, just like bread and Vegemite …yum!

Netflix says bye-bye to HD-DVD. Is this the final blow for HD DVD? Netflix says that, as of now, it will purchase only Blu-ray discs and will phase out HD DVD by the end of 2008 (roughly). Now I have to find a place for my HD-DVD player in the closet next to my 8-Track tape deck.

Rumor – Did you finally get that “new” 16gb iPhone? Well, the word on the street is the price for the iPhones will drop real soon (sound familiar?) and an even newer 3G version is to be released right around the corner. Also heard at the geek cooler, Apple is holding a “special event” during the last week of February…for what? Let the guessing begin.

Gadget of the week – I love digital photography, you can snap pictures like crazy and delete the ones you don’t like. For the ones you DO like or maybe even LOVE, you want a “hard copy”. A real picture, if you will, to have and to hold, to share and to give. Well a cool new mobile digital printer is coming from the original creators of pics on the go, Polaroid.Smudge proof, 2” x 3” borderless, sticky-back prints in about 60 seconds. By USB or Bluetooth. Fun for the whole family, or just me.

Tip – got dups? To get rid of those pesky duplicate songs in iTunes, just go to the View menu and choose “Show Duplicates” then a list will appear before you, do what you will….If you have any techy, geeky, nerdy, or gadgety news, reviews, tips or tricks – Let us know and we can share them with the world. Send them to: aGEEKspot at gmail dot com.